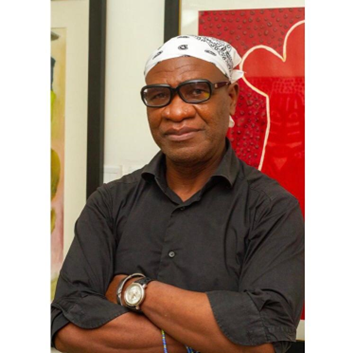 Burns Effiom is a designer, performance artist, curator. He represented  Nigeria at the DAK’ART Biennale 2010 in Dakar, Senegal. He was a participant  of the Nigeria|Korea Navitour with National Gallery of Art Nigeria 2013; held  at the Total Museum of Contemporary Art, Seoul, S.Korea.

An Alumni of Bruce Onobrakpeya Foundation’s Harmattan workshop; he collaborated with United States of America Department of Information (USIS)  and Bronx Musuem on an Art and Diplomacy programme titled “The  Smartpower Initiative”.

He is also the Nigerian representative of ‘AFIRIPERFORMA’ – a collective of performance artists of Africa. He has collaborated with the Goethe Institute for the National Pop-Up Theatre Lagos 2013; and was co-curator for the International Art Expo in Lagos 2008 – 2012. He has exhibited at the Africa Regional Summit of Arts (ARESUVA) 2009. He also co-curated “Road to KPAZAA”, a retrospective of iconic ceramicist Ladi Kwali & Uche Okeke at the SKOTO Gallery, New York.

Burns curated Complexities, Portraiture and Abstract Dialogues in Nigerian Artists for the Calabar Gallery, Harlem USA earlier in 2018. He is the curator for the first and oldest private gallery in Nigeria, Bronze Gallery Calabar and has been listed on 1000 Artists by the Smithsonian Institute,  Washington D.C. He is the curator for the Art Galleries Association of Nigeria.

He is currently working on the epic touring exhibition titled ‘100 Years of Modern Art in Nigeria. From 1900s to Contemporary.”

Mr Effiom sat with Sadiq Ajibola Williams for this interview.

Q: WHAT WAS 100 YEARS OF NIGERIAN ART ALL ABOUT?

A: I will start by saying the question should be about art in Nigeria and not Nigerian art.

However 100 YEARS OF MODERN ART IN NIGERIA is based on the reverberations of the art scene in Nigeria relative to the global.

An exhibition throwing a search light into the reservoir and oeuvres of a plethora of artists who made a difference in ideology and manifestos in the art of Nigeria.

100 YEARS OF MODERN ART IN NIGERIA is a chronological exhibition expanding the timelines of the transition in art practice in the space called Nigeria before and after 1914 which was the amalgamation of the great peoples and cultures of some part of West Africa to form a Republic called Nigeria.

The exhibition fuses the so called Tribal art and the based on the canons of western art.

It would also be very important to add that the body of work or rather content of the exhibition is largely drawn from Bronze Gallery-A pioneer gallery founded by Afi Ekong- the first Nigerian woman to study art from the perspective of western education.

Q:  WHAT WAS IT LIKE TO BE HOSTED BY YOUR COUNTRY’S NATIONAL MUSEUM IN LAGOS.

A: It was more like reunion. Bronze gallery was founded on a premises not far from the National Museum Lagos. Apart from dealing the avant-garde artists of Nigeria in the sixties Lagos.

The main core of Bronze gallery was also the traditional/classic art of Nigeria.

100 YEARS OF MODERN ART IN NIGERIA is documentary on the evolution of art in Nigeria. This evolution has the National museum as a key player. The museum apart from hosting historic and epic exhibitions of notable artists in the past was also the habitat of important objects of art in Nigeria.

The fusion and nostalgia that was the confluence of the exhibition would best be captured in film, which happens to be the most complete form of art.

It was also a learning curve for the museum custodians of today experiencing the archives and artifacts fit for a museum but emanating from a private source.

Q:  IS IT TRUE THAT THE HISTORY OF YOUR GALLERY AND THE COUNTRY’S NATIONAL MUSEUMS IN PAST EXISTED.IF SO COULD YOU SHED SOME LIGHT ON WHAT THIS WAS ABOUT?

A: The National museum Onikan Lagos was set up as part of events relating to archaeological discoveries during colonial exploration in areas of mining which also led to the finding of Nok culture in Nigeria.

The expanded curiosity culminated in the establishment of Department of Antiquities headed by a Briton Kenneth Murray who also doubled as educational advisor on arts in colonial Nigeria.

This kind of setting was a ground for an interface between the traditional and the western style of art in Nigeria.  The National museum became the temple of that marriage. Most of the traditional objects were stored at the museum as new policy.

The Nationalist or pro independence artists who found their voices through education and western art drew their inspirations, pride, dignity, heritage and identity from the content of museum.  Bronze Gallery is an embodiment of these epic events. It has  it’s depository archives and records of events that interprets this visual language and landscape in posters, prints, paintings, ceramics, sculptures, photography and archives spanning more than a century .

Q:  WHERE IS THE TRAVELING EXHIBITION NEXT TRAJECTORY TAKING IT TO?

A: 100 YEARS OF MODERN ART IN NIGERIA is divided into different forms as in paintings, sculptures, prints and photography.

The first form of the touring exhibition is sculptural titled – EVOLUTION OF SCULPTURAL FORMS IN THE ART OF NIGERIA.

The first leg at the National museum Onikan Lagos was just a showcase of about one fifth of the collection. Because of the constraints of the size of exhibition space.

The full exhibition is still on the table in Lagos. But the subsequent tours are planned for New York, Los Angeles, Chicago, Paris and Abuja.

Q:  HOW BEST COULD YOU DESCRIBE THE/YOUR PROFESSIONAL EXPERIENCES THUS FAR, PRIOR TO AND POST THE EXHIBITION AT THE NATIONAL MUSEUM.

A: My insight for putting together an exhibition of this magnitude was based firstly on my experience as a co curator of International Art Expo Lagos. The exhibition had 5 editions. It was an annual exhibition set at the National museum Onikan Lagos between 2008-2013.

The exhibition sponsored by National Gallery of Art Nigeria showcased curated works of art by top notch galleries in Nigeria.

I believe these exhibitions accompanied by well crafted catalogues were the precursor to Art X Lagos.  After being part of the curating team for 5 years I started running the affairs of the oldest private visual arts gallery in Nigeria in 2014.

Armed with insight of administration and politics of the art world.  The major experience I have gathered from the whole scenario is the lack and segregation of funding in the visual arts sector in Nigeria

The difficulties in getting funding to expand relevant trajectories and epic narratives like the 100 YEARS.

Q:  WHEN CAN WE EXPECT FURTHER INFORMATION ON BRONZE GALLERY-HABITUDE GALLERY ABOUT THE TRAVELING EXHIBITION IN THE COMING MOMENTS?

A: The information regarding 100 YEARS OF MODERN ART IN NIGERIA is recurring.

Every time art in Nigeria is mentioned whether in past or in contemporary. Those references are a reminder of the said exhibition.

Any time Picasso is linked to the art of Africa it reflects the exhibition. Those insightful narratives with visual language concerning Negritude, Harlem Renaissance, Black Lives Matter, Ife bronze, Benin bronze, Igbo Ukwu are all reminiscent of the contents of the touring exhibition.

Q: WHO ARE THE ARTISTS, FIGURES OR SCULPTURES ET AL ON FEATURE AS THE TRAVELING EXHIBITION EVOLVES.

A: We have the unsung artists like the court artists in Benin Kingdom whose works were not formally signed just like the communal artists.

Q: WE HEAR YOU ARE ALSO AN ARTIST PERFORMANCE ARTIST INTERIOR DESIGNER AMONGST A FEW? HOW DOES THIS INFLUENCE YOUR APPROACH TO CURATORIAL.

A: We cannot remove history of art from history of architecture. Performance art is basically making art with your body as the major prop or material. This is perhaps what you call minimalism in architecture and decoration. Or maybe being poetic with words

I also studied classical literature. But instead writing my stories in narratives I paint or draw the story. These interchangeable connections affect me like synesthesia in decoding art as part of hermeneutics.

Q:  WHAT DO YOU BELIEVE IS THE FUTURE OF THE SPECTRUM OF ARTISTIC EXPRESSION COMING OUT NIGERIA LATELY IN COMPARISON TO KEY ART MARKETS AND SCENES IN GLOBAL POLITY OF ART AND OTHER MODES OF CREATIVE EXPRESSION?

A: The future I think will linked to the past. In most societies that have embraced the effects of technology and art, the museums are filled with nostalgia of the past.

The advent of NFTS and digital art are still tied to the longing for a sense of history in narrating the future.

The artists in Nigeria have bemoaned the tag of “Nigerian artist “. They want to be known simply as artists. Then comes the issue of identity which is a major theme as prescribed maybe by galleries for commercial and trendy reasons.  If Damien Hirst references the Benin bronze head in his classical composition in the contemporary.

It would make an artist of Nigerian descent have a closer look at content that would have seemed localized from the standpoint of a Nigerian artist. The only way is up with all the odds because there are multiple trajectories that pronounces the modes of expressions in world, reminding the creatives/artists in Nigeria about global equity and effects. The music genre and dance form of Nigeria is lingering on in many international sanctuaries.  If the visual artists in Nigeria just merely re interpreted these repertoires it would lead to such an unprecedented color or even visual vocabulary. Just as art is the work of imagination of man. The society of humanity will always appreciate or depreciate what is considered to be new wether in pretentious or for real. What would be in real terms anyway. Is it augmented or virtual reality.

Q: WHERE DO YOU SEE THE FUTURE OF CURATORS IN NIGERIA GOING GIVEN THE MASSIVE RESURGENCE OF ART AND CREATIVE EXPERIENCE GOING IN NIGERIA

Nevertheless we have had outstanding curators of Nigerian descent. Thanks to Okwui Enwezor and his impact at Venice Biennial and Documenta in which he excelled.

Bisi Silva did a lot that could only be massive inspirations especially to upcoming young women in Nigeria. Just like we had great artists  who took the world, we are not too far from taking horns of the bull called curating.  But I know also that there are certain buttons waiting to be ignited regarding field of curating.

Q: THOUGHTS ON RECENT RECALL OF OUR STOLEN ARTEFACTS AND THE RISE OF EXHIBITIONS IN BENIN AND ONITSHA.

A: Returning of stolen property without a penalty is to say the property was not stolen.

Smuggling of artifacts has perpetrators and the receivers. The receivers are dominantly from parts that have well organized art markets and institutions. The assistant perpetrators who are supposed to be the custodians of their great objects are tantalized by lucre.

Custodians of Cultural artifacts in Nigeria are mostly unaware of priceless nature of what may appear to them as heathen based on Pentecostal revivalist attitude.

Besides if objects were intrinsically made for communal benefits in the past and the same community is forsaking that past as passive. What would then be the meaning of those objects except for those exhibitions of the returnee objects who are on whistle stop in their homelands. Because the machinery for conducting their authenticity is the hands of those who looted them in first place.

If you wanted to place let’s say a Mumuye wood work in a tribal art auction in Europe.

The provenance would have to be in Europe even when it was carved on earthy soil in the middle belt of Nigeria.

The instruments of the authenticity of these objects must be part of their DNA. Without that these objects released from their glorified prisons will always lifeless,without a voice about what they represent. If they have not been already coded and rebirth immutably as fractions of NFT waiting to be metaversed. 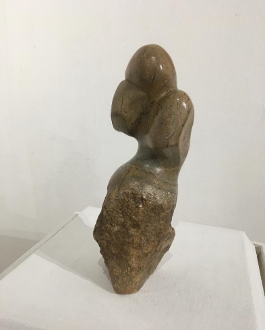 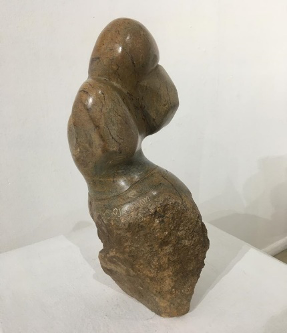 More Images for:
100 YEARS OF MODERN ART IN NIGERIA