The Acting Chairman of the Economic and Financial Crimes Commission, EFCC, Mr. Ibrahim Magu, was on Tuesday, May 14, honored with the Exemplary Leadership Award 2019 for Outstanding Leadership In Public Service. Magu was honored by Euro Knowledge Group, a prestigious Foreign Investment Network, FIN, at the EFCC’s headquarters in Abuja.

Chairman of Foreign Investment Network, Mrs. Yinka Fayomi, who presented the award to the EFCC’s Chairman, said the award is in recognition of those who have impacted on the nation’s economy and other sectors of life as she said that the Commission is one of such organizations that deserve the award.

“Over a period of time since the Acting Chairman has been acting and working, there has been a tremendous improvement in the fight against corruption. I remember two years ago, when we were involved with events in America and we were supposed to recognize him on what he was doing but he wasn’t available”, he added.

“We are very pleased to have this opportunity to recognize him and the team that is working with him. This recognition is for him to do more and we like what you are doing, and it is an opportunity to spur you to do more”.

Magu, in a remark, thanked the delegation and representatives of Foreign Investment Network for the award as he called on Nigerians, irrespective of their profession to join hands with the Commission in its effort to rid the country of corruption. According to him, the fight against corruption is not a one-man’s business but a collective responsibility.

The EFCC Chairman who further explained that “Fighting corruption has never been a one man’s business”, added “We also recognize the contribution of stakeholders because this is not a job that can be done in isolation and it is a work that nobody can do alone”, he said.

“I am very happy that this award is in recognition of our little effort in the fight against corruption”. 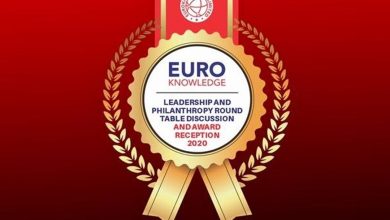 Garlands At The Euro Knowledge Leadership And Humanitarian Award